Many GCCG members have enthusiastically attended the international Eurotour events which have been taking place around the continent for more than 20 years. Unfortunately Eurotours have now become so popular with gay classic car enthusiasts from all over Europe that many GCCG members were disappointed not to get a place when bookings for Eurotour 2016 opened and quickly sold out. Our South Western Area Organiser Jeremy decided to take matters into his own hands and has now organised a GCCG trip to the Isle of Wight at the same time as Eurotour on 13-15 May. Passports will not be needed for this one. More details on the Members Events page. … END_OF_DOCUMENT_TOKEN_TO_BE_REPLACED

The first ever GCCG National Show held in Surrey in August 2015 was a great success despite weather conditions which could be described as variable. We've decided to make this a regular fixture in the GCCG calendar, and the venue will move around the UK to give members in different regions the opportunity to attend - and indeed, to spread the load of organising a large event. The 2016 GCCG National will take place on 20/21 August 2016 at Barlow Woodseats Hall near Chesterfield. With many members travelling a considerable distance to attend, there's likely to be an enthusiastic uptake for the option to camp on site too. … END_OF_DOCUMENT_TOKEN_TO_BE_REPLACED

GCCG now has over 1000 members and partners. To celebrate this a limited edition 'I'm One... in a Thousand' umbrella has been produced for members who can now flaunt their statistics. The umbrellas were launched shortly before the NEC Classic Car Show and many members took the opportunity to collect their umbrella from the club stand. … END_OF_DOCUMENT_TOKEN_TO_BE_REPLACED 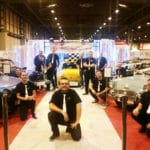 GCCG's organising team led by South East Area Organiser Alan Webb-Moore were delighted to be recognised with a second prize in the awards for Best Small Club Stand at the 2015 NEC Classic Car Show. The NEC show is a high profile opportunity to publicise the club, and putting on a display there requires a lot of effort, but Alan volunteered to lead it for the second year in a row and even managed to surpass the display put on last year. … END_OF_DOCUMENT_TOKEN_TO_BE_REPLACED